In May 2018, someone named Marcus aged 23 from Zambia messaged me asking for help. I asked him to send me photos and he sent me few of them. (His camera quality is Poor) 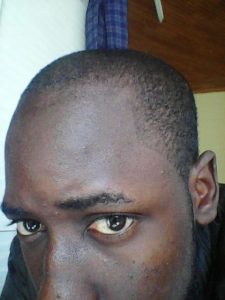 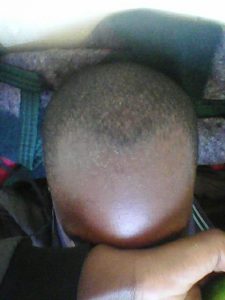 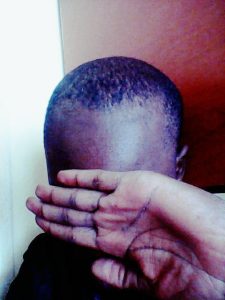 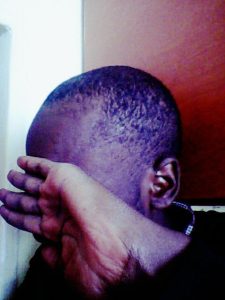 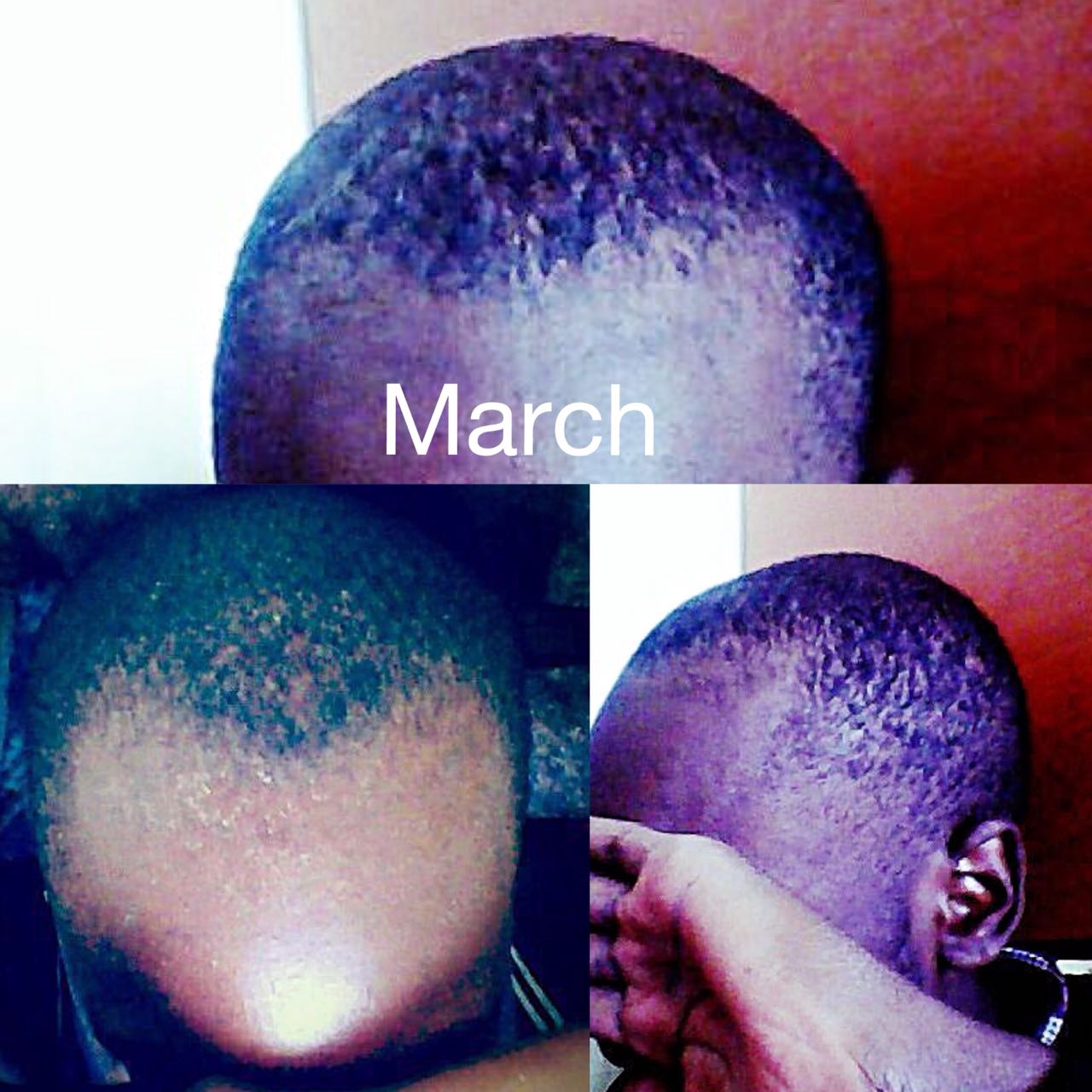 His Original Hairline with no Receding 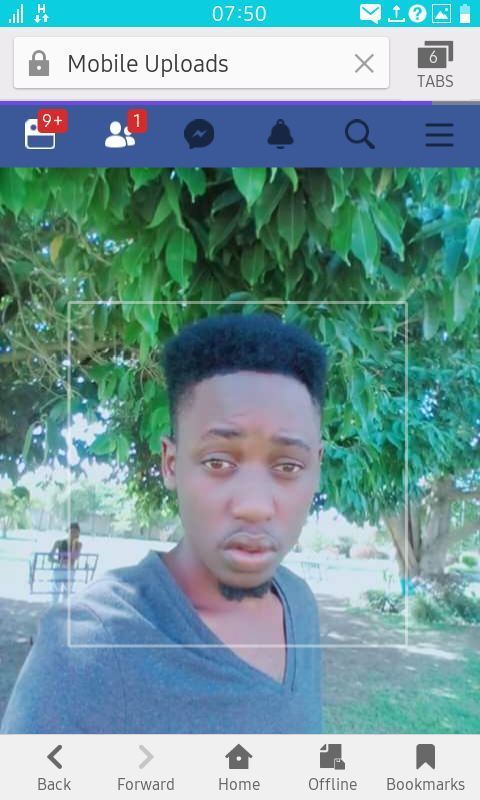 As he claimed, he had no money, no job and had spent all of his money on Minoxidil with no results but horrible side effects. He also tried rice water,eggs,honey,oils but still there was no progress.

He was asking me if he should just perform Detumescence and Towel massage to regrow hairs back. I told him that he didn’t need either of them but focus on changing his diet.

He thought Diet can’t reverse Fibrosis. I don’t completely agree with this statement, in early to moderate stages, Fibrosis of scalp can be stopped and reversed completely or to major extent. If there is occurrence of Chronic Fibrosis, then Diet won’t reverse it fully and would affect it only a little.

Upon little inquiry, I realized that he started losing hairs in last 12 months and I thought probably he can reverse most of his hair loss and advanced his hairline.

I told him to eat foods I commonly suggest others Eggs, Beef Liver, Raw Milk, Wheatgrass, Bee Pollen, Brown Rice, Fruits. (I don’t eat beef liver and I recommend this food because it’s Rich in B Vitamins, Vitamin A and other Micro-nutrients, not for any other reason. If you are not comfortable eating it, don’t eat it, eat Pastured Raised Eggs instead)

Then I completely forgot about him for next few weeks and on one fine day, I got his message out of the blue.

He claimed to have grown back hairs in M shape and his bald areas got covered with Terminal Hairs.

Here are some photos 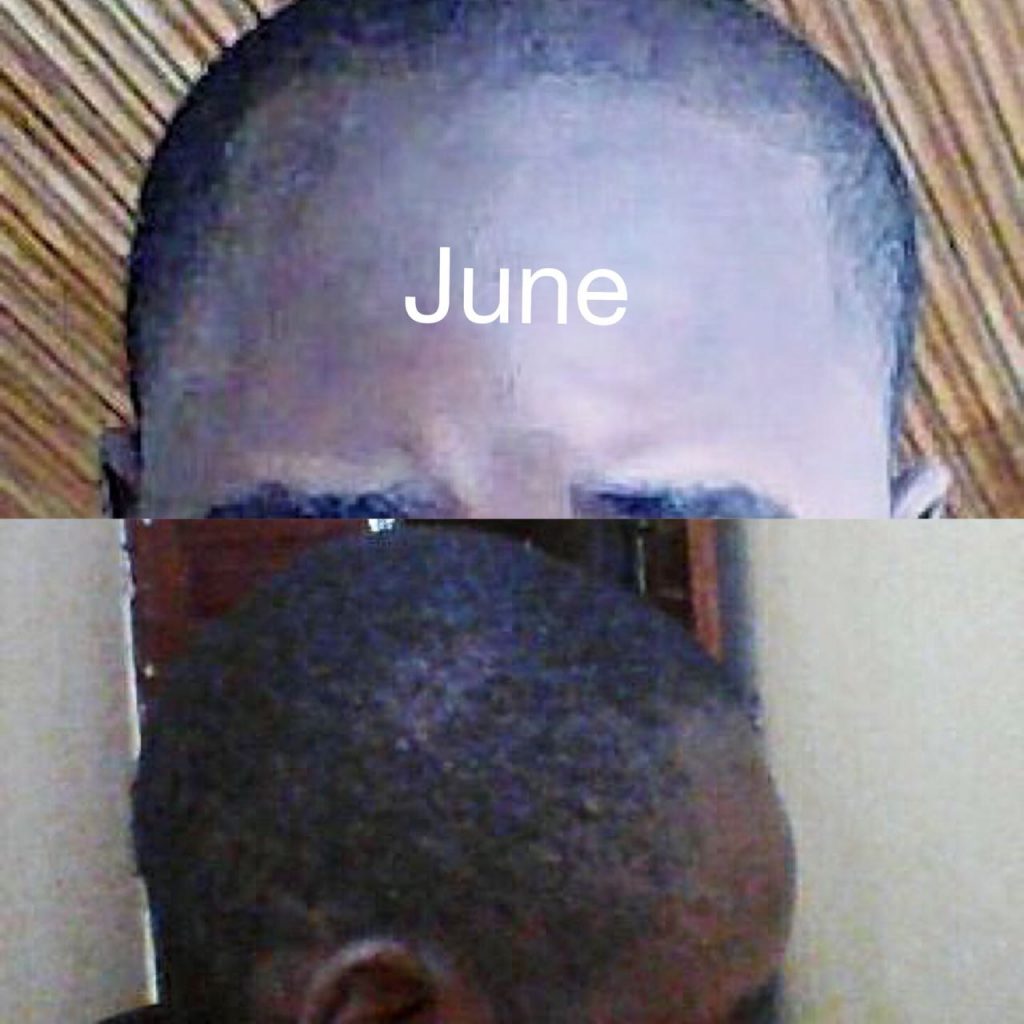 But because his photos were not clear, including me nobody else believed him completely.But he promised me to take clearer photo in next few months with better camera.

But I asked him what he was following. He graciously agreed to share in his words (with grammatical correction and punctuation)

“Before I noticed some regrowth in my hairline ,my diet was completely vegan after i stopped processed foods and meat ,milk and carbs. I tried all methods even massages,head stands ,minoxidil ,onion juice, massage improved my hair density a but but not significant. I knew i had to keep searching,that’s when I came across your story.

At first i was skeptical about your dietary advice I thought you were just saying it. But i followed it anyway I introduced fruits,brown rice,meat,chicken,milk,eggs, honey,beans,and Moringa supplement. Two months down the line I saw nothing, besides my gut felt heavy after every meal but i felt energetic and at times I had constipation and gases. I complained to my mom she then called her herbalist cousin. He has some knowledge on digestive issues ,i outlined my dietary plan .The man got back to me and said that the diet was perfect but he insisted that I check the brand of the Milk I took and times I at which I ate my meals . After following what he said all these gut problems left and I changed my milks brand .

I always had a habit of looking in the mirror tracing for regrowth but I couldn’t see any hairs. Luckily one day I went to have my hair cut for my next photos .Then the barber man got shocked and asked if i had borrowed a few hairs lol. Thats when he cut lined my hairline and sides .Sukrut, I was shocked I could see my hairline and my thin areas have tones of baby hairs I barely grew,I noticed my hairline grew hairs and my existing hairs gained good color and its elongating quickly .But I’m facing one challenge ,thickening it to the max is an issue for me. Although my hairline is growing hairs and my crowns covered but the area beyond my hairline is a bit thin .I thought it was vitamin D but here there’s plenty of sunlight .Maybe I’m impatient. Whats your advice ?”

First of all, a lot of people wanted to get Aerial photo comparison. He sent me his photos next day for better comparison 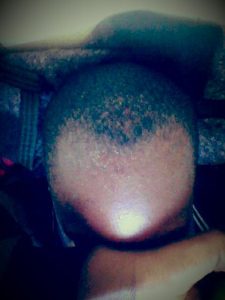 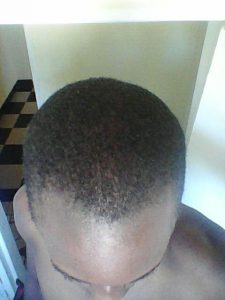 I asked him about his special carb diet and his meals. His itching and dandruff also resolved by itself when he changed to Coconut oil from Soyabean Oil. This is what he mentioned

I told him to add few more things to his diet. He was taking Zincovit as Multi-Vitamin. I told him to eat pasture raised eggs, pumpkin seeds, oysters, Wheatgrass.

Then he shared his story about why he probably started losing his hairs. In his own words (with grammatical correction, punctuation and removing certain inappropriate words/sentences)

“Before i moved out of my mothers house in central city, our diet was gluten free and despite using omega 3 vegetable oil back then.My mom had a traditional way of cooking using less oil on meals we ate meat twice a week ,village chicken (organic)once but she insisted the soup was nourishing so I made sure the plate was clear after my meal. We ate fruits a lot too ,we has a guava ,avocado and mango tree in our plot ,But I was dumb and a huge novice back then so I used harsh chemicals on my lovely hairs go black or super black die soft and free perm lotion. All these never showed harm to my follicles not until moved to the capital city .I put my old mom way of cooking behind me and started eating excess soyabean oil in my meals. In meals like pork ,beef ,greens e.t.c ,Five months down the line I developed dandruff and horrible itching ,fatigue ,blared visions,weak erection and annual sores.

To make it worse I worked with a welder before so I was welding and grinding ,And my lunch was always soy powder geez it was sweet such that I carried home after work. One day my ex girlfriend made fun of me that my hairs in front were shorter than then ones at the back with a visible patch there.I thought she was joking not until my brother laughed out loud and said i had a thinning area on my side line on the left side until this day I noticed. Next day bought a hat for hiding the old looking head. At first my hairline moved like a mature hairline would recede. Next month I had a serious flue, went to the clinic i was diagnosed with amoxicillin anti-biotic .Oh lord, after a moth the M pattern formed and my hairs thinned plus I lost weight and always woke up with body aches even when I rested. That’s how I put my MBs to better work of research on my hair loss although I found comedy preposterous type of methods😂😂😂😂,rogaine,home remedies that work after ages ”

He asked me for advice again. I told him to stop consuming all synthetic supplements and get everything from food. He also asked me about Towel massage.

Within following towel massage for a week, he lost all of his regrowth. Same happened with me (but that’s not necessarily bad as most think it’s) Here is his photo 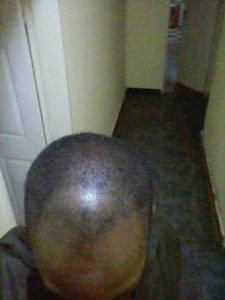 Because he lost all the progress he has made in couple of months, he was worried that if he has damaged the hair follicles. I told him to do it only for 3 minutes.

Then I told him to add few things in his diet and followed up with him after a month. He told me that he had tooth cavity and he had to take anti-biotics and he lost all the hairs he had gained.

Then after a wait of 3 long months, he messaged me again with his new photos 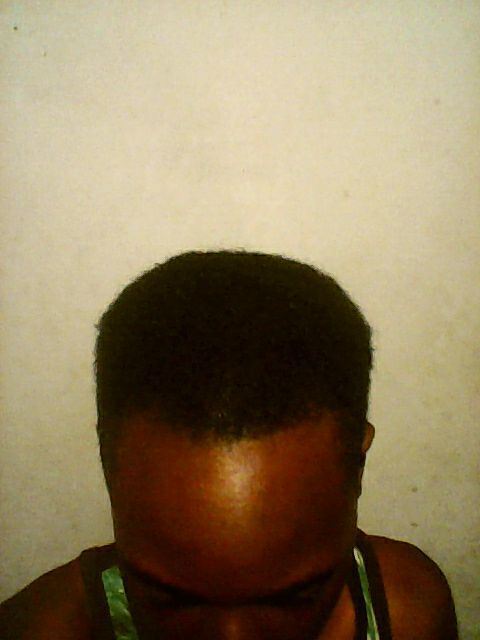 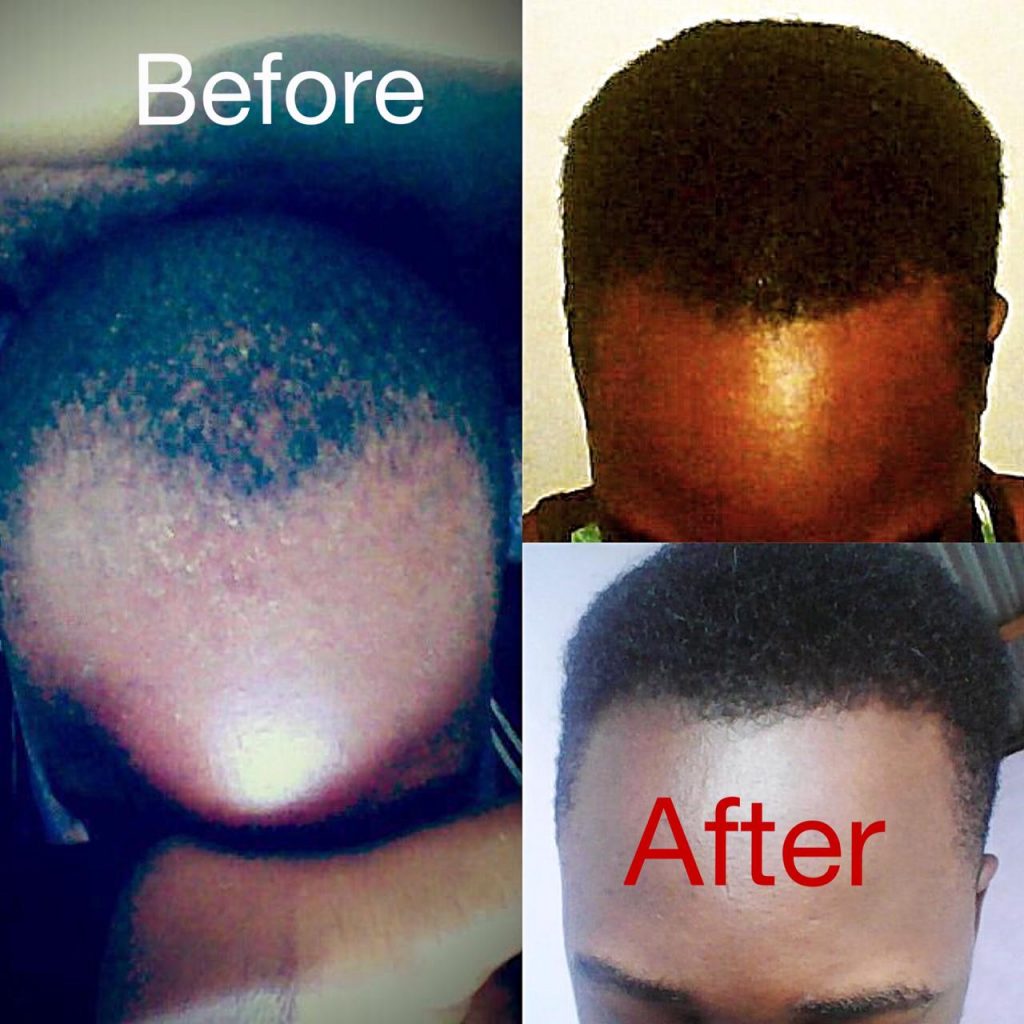 Few Takeaways
1. Don’t blindly follow his diet in order to get your hairs back or recover hairline. Experiment with different foods and stick to it for at least 3 months before you notice the improvement.

2. If you don’t have any hairs along the hairline or if you have completely bald patch, then probably diet changes won’t regrow hairs magically but it can possibly stop further receding and thinning.

For long time, I also blindly took Vitamin D supplements, Zinc Supplements, Multi-Vitamins etc etc. All of them did more harm to me in long term than any benefits. I have several people reporting progress for shorter amount of time when they were on such supplements. All of their progress was reversed within few months of stopping the supplements.

Did you enjoy reading this ? Want to read more of such success stories and what did they follow ? I have included them in Hair Regrowth Blueprint, check it here 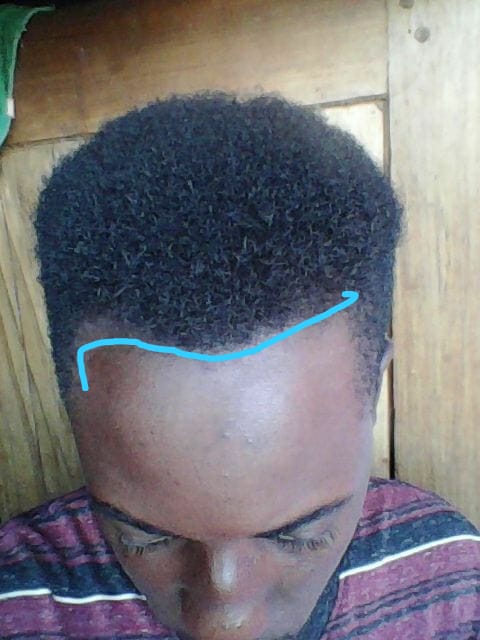 Update : Marcus has promised me to send a recorded video soon. I will upload it as soon as I hear from him

If you want to read my journey read it here