When I was experimenting to regrow hairs, I was trying different foods, supplements. In April 2017, I get message from a reader. His friend recovered entire crown with ZMA. It’s a supplement which contains Zinc, Magnesium and Vitamin B6. It’s supplement usually taken by those who want to boost their performance in Gym Performance, increase Testosterone.

Naturally, I was curious. After trying Detumescence and Towel massage for 8 months along with Ray Peat inspired diet, there was no sign of improvement on my crown area with this diet. Frankly, I was ready to try anything.

Before, I try any supplement, I usually try to research more about it on Amazon, Youtube, Forums. I found more than 10 people who swore by ZMA to improve density of hair. Many of the reviews raved about Positive effects of ZMA on their sleep, energy level, mood. I was completely sold on trying this new magic supplement.

For first few days, I experienced more stamina, more energy, deep sleep (I had in years) and within a week, middle 2/3rd of my hairs started growing. I checked it multiple times to confirm I wasn’t dreaming so I continued it further. I could still see continued improvement in middle 2/3rd area.

I couldn’t believe that I was seeing improvement. Many people also started messaging me about their improvement. Some people just wanted to wait for some more time.

I was in Heaven.

And then came a real shocker. I didn’t pay much attention to it earlier. I was experiencing more and more bowel movements up to 6 times in a day. Initially, I thought, this would eventually normalize after a week, but unfortunately it didn’t.

Then some others also started complaining about it so I started researching more about it. I realized it it’s Magnesium Aspartate causing this problem.

I was really seeing the improvement, but I didn’t want to get stuck up in washroom all the time. Every time, I would go anywhere, this fear would haunt me. So I had to stop it after a month and the problem vanished after that.

However, that was the time, I started getting before and after pictures from people 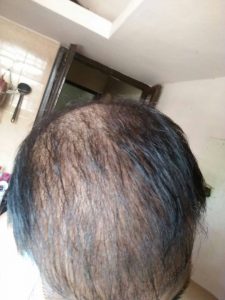 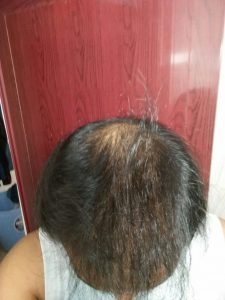 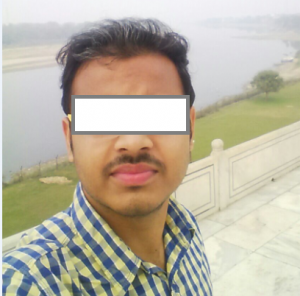 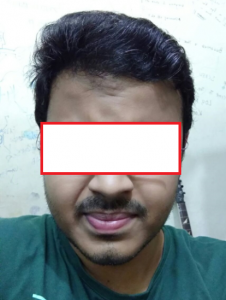 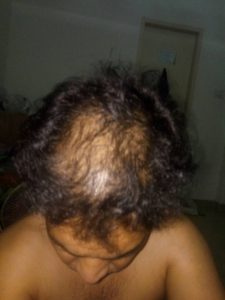 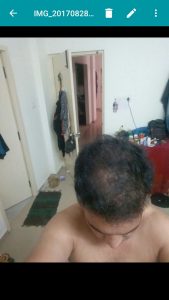 And there few more and I also got several messages from people who could see the improvement but they didn’t have any before and after photos to share it with me.

This convinced me that it was Zinc that was helping. Was I right in assuming Zinc is doing this ? You will know it soon.

I started reading a lot of literature on Zinc in connection with hair loss.

But their before after photos looked dodgy. Here are they 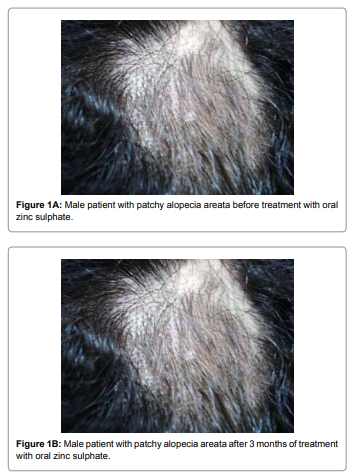 I have no idea if they accidentally put the same photo or it was exactly how it looked like 3 months on Oral Zinc Sulphate.

But there was another study : Zinc Deficiency Associated with Hypothyroidism: An Overlooked Cause of Severe Alopecia

Here are the photos 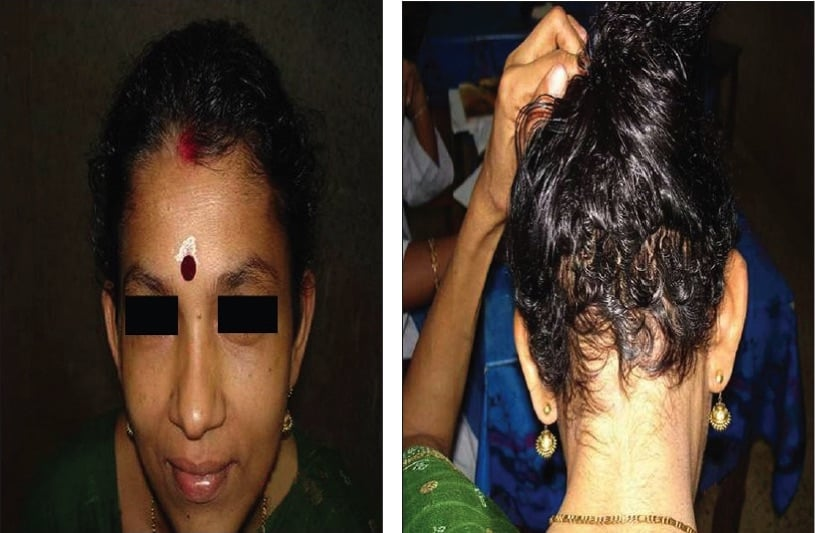 This was very impressive. However, it didn’t look like normal hair loss. Especially at the back but still I saw tremendous improvement in her frontal hairs.

And I also found several evidence on forums like this one

6 Months on nothing but Zinc with Amazing results 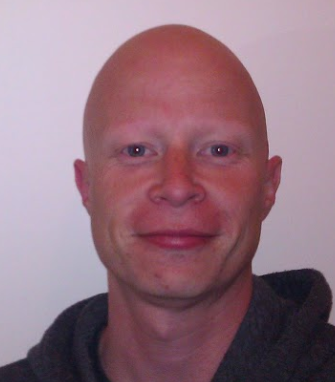 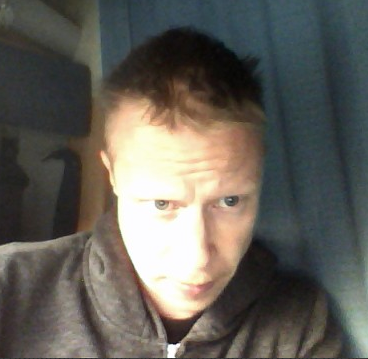 Because this ZMA thing worked well for me. I decided to start Zinc supplements because it didn’t have side effects of excessive bowel movements.

I bought Zinc Picolinate (as it is most bio-avaialble form)

I started taking it every 2-3 days because dose was much higher than RDA. I took it for more than 3-4 weeks with zero improvement. Instead whenever, I used to consume Zinc without food, I would feel so nauseous that I would almost throw up but it worked well with Proteins/Fats.

I thought it was just me not seeing any improvement. Many people I was working with Zinc alone supplement, didn’t see any results at all except one who saw elongation of hairs along hairline.

In fact, including me, many started experiencing side effects like premature grey hairs. First of all, it was not producing any results for hair and on top of that, it was giving me and others premature grey hairs so I decided to ditch it and started researching on reversing grey hair on youtube and I came across Morley Robbins Root Cause Protocol.

And then everything started making sense. After studying and implementing it, I revisited same study of a woman recovering from diffuse Hair Loss and I realized the mistake I made. If you closely read her report, you will know something

There is difference between absolute lack of Nutrient and Bio-availability of Nutrient.

Watch this Video “You are not Anemic”

What should be done in this case is not supplement more zinc, instead run Full Iron Panel Test (Serum iron, Transferin Saturation, Ferritin and Ceruloplasmin)

Giving Zinc supplement in such cases, shouldn’t be even done. Watch this video which explains Root Cause Protocol succinctly.

It’s purpose is to reduce Iron Load and make Zinc bio-available. If you supplement with Zinc (without being truly deficient) then it would further reinforce the symptoms of Excess Iron and Zinc deficiency.

It’s just like taking Iron supplement if you have low Hemoglobin or low Ferritin. It can help you in short term but can cause damage in the long run because true Iron deficiency caused by lack of Iron in diet is very rare.

Heavy metals like Arsenic was used to increase Hemoglobin which stimulates RBC production, but just because Arsenic improves Iron levels doesn’t mean one should use it.

Then I started researching why so many people including me got results with ZMA. I then thought it was Magnesium.

I realized I was missing something. Zinc and Magnesium didn’t create much difference. Now it was time to test Vitamin B6.

Vitamin B6 is co-factor for Zinc and Magnesium, it potentiates effects of both. Then my research again started.

I found interesting connections on Forums than in scientific literature.

There is very little evidence of Vitamin B6 in Scientific Literature.

Researchers found that this enzyme Pyridoxine 5 – phosphate oxidase increased in mice, as hair follicles progressed from the telogen (resting) phase to the anagen (active growth) phase. This supports the concept that the metabolism of vitamin B6 is a significant process in the formation of brand new hair shafts.

Vitamin B6 along with Zinc inhibited 5 alpha reductase activity better than just Zinc and Vitamin B6 was also used with diffuse alopecia in Women.

But if you check forums, there is plenty of evidence of Zix (Zinc, Vitamin B6 and other ingredients) There are several threads on hair loss forums/Reddit and many success stories.

Here is one thread : My Zix Experience – How B6 And Zinc Have Saved My Hair

The evidence was so huge that at one point, I thought of ordering Zix but then I thought before I use Zix, I should at least try Vitamin B6 first. I bought food based Vitamin B supplements which contained all B-Vitamins.

As soon as I started consuming it, within a week I again started seeing changes in my hairs as I had seen in my ZMA days. This improvement lasted for 3-4 weeks and then it slowed down.

Then when I started connecting the dots, the picture started becoming more and more clear.

If you look at what people do to restore their hairs. Eat/apply Onion/Garlic/Fenugreek Seeds/Black Cumin Seeds. Each of them have substantial amount of Vitamin B6.

And several people reported improvement in their density and thickness after using it. 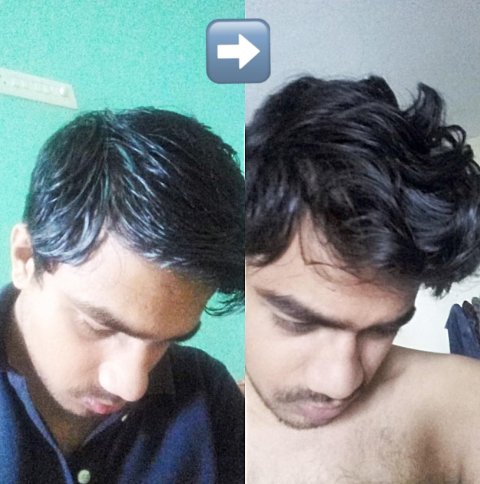 Of course, these photos are not comparable but this person mentioned of significant improvement. There was another one who also saw improvement 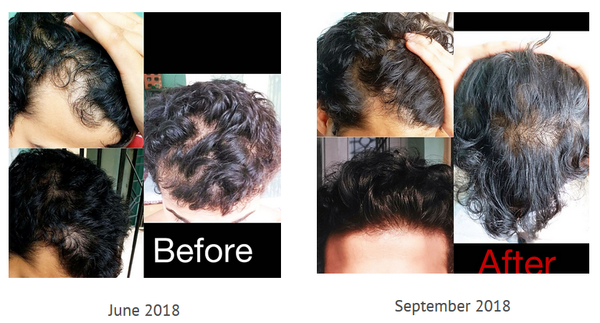 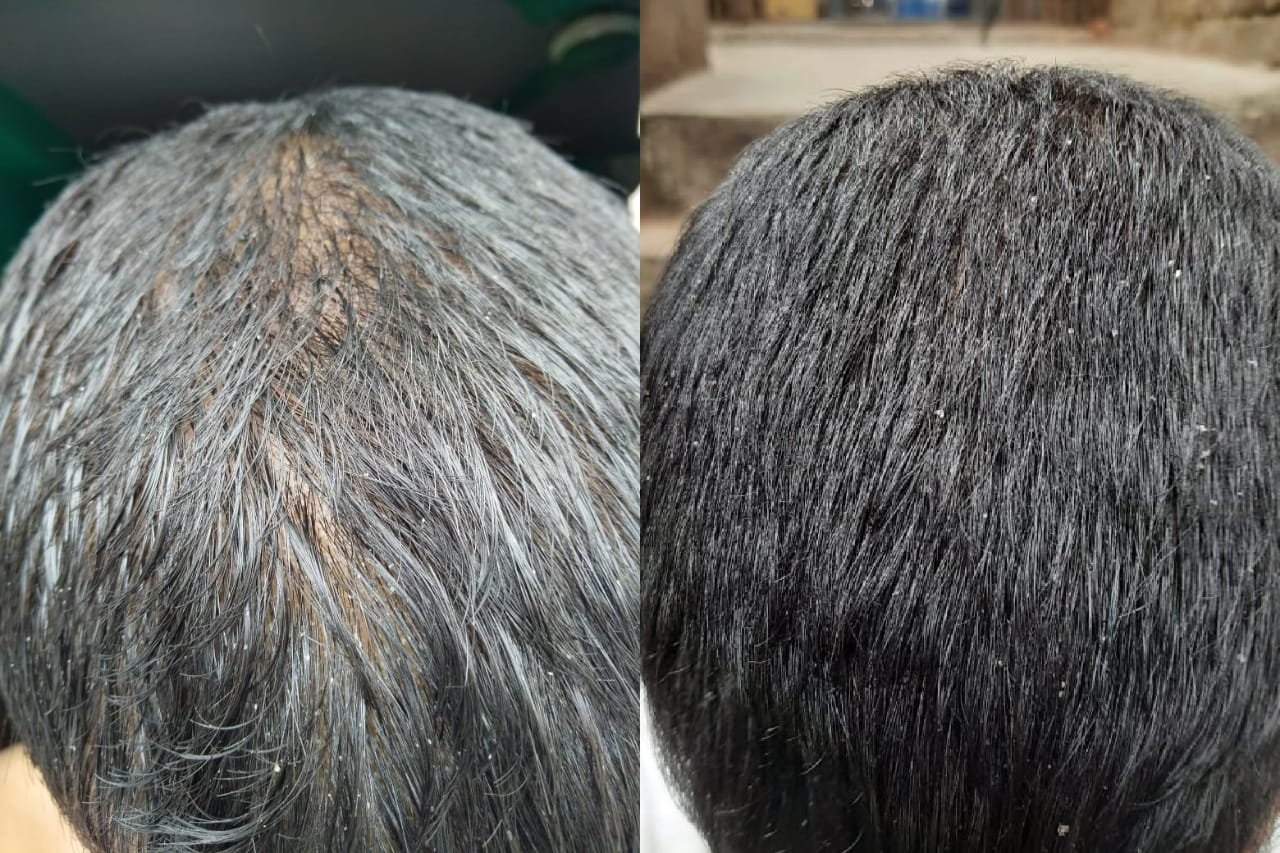 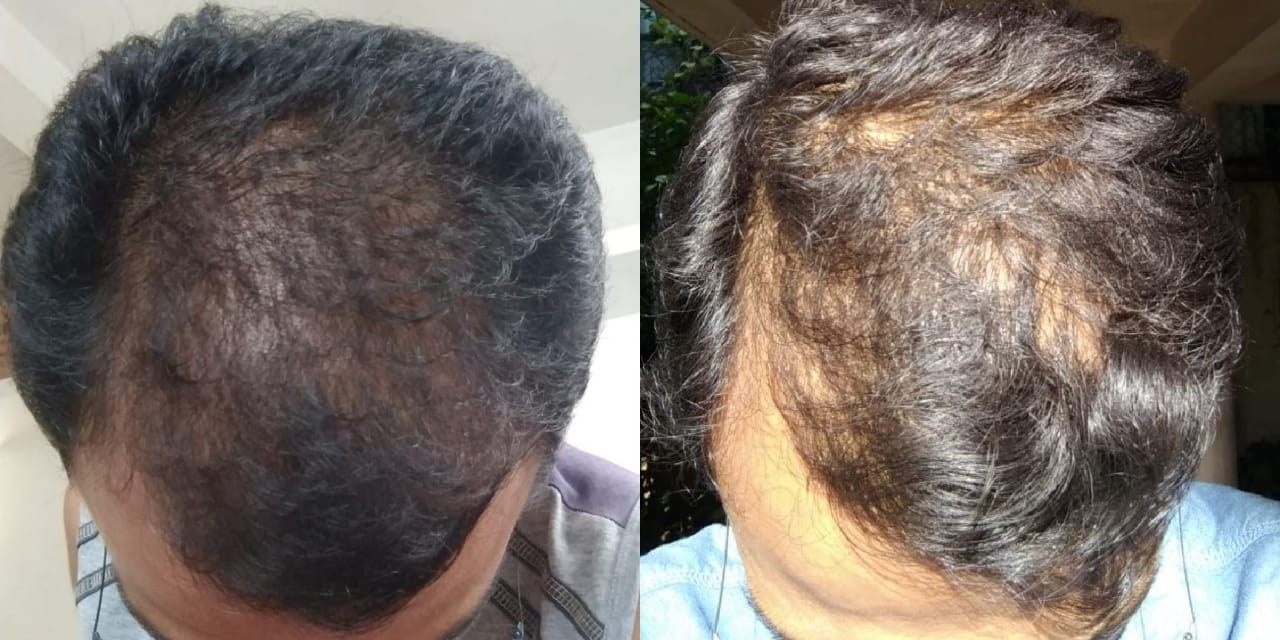 Both of them saw improvement after adding Vitamin B6 (overall B vitamin rich foods) in their diet.

There are more examples here

So what’s the conclusion ?

If you have early cases of Pattern Hair loss and/or diffuse hair loss, you shouldn’t blindly supplement with Zinc. If you want to use Zinc, first check your Iron markers if they are perfect.

Rule out excess Iron creating Zinc deficiency symptoms. Then if you want to supplement with Zinc, use Wheatgrass (check labels to see if it has Zinc) or eat oysters and other Zinc rich foods. Don’t bother about Zinc supplementation.

If I were you, if I suspect I have true Zinc deficiency (not getting enough from food), I would first try foods and then get more Vitamin B6 from foods rather than supplementing with B complex or B-6 supplements.

Eat foods rich in Vitamin B6.

1. Grass Fed Beef (I don’t eat it, I suggest it to people who can eat it and are OK with it. If you are not OK for any reason, don’t eat it)

Just because there are not enough studies doesn’t mean you should not try it. If you wait for studies for every food or nutrient, that will probably never happen.

There is growing tendency among many so called “scientific” people who scour hair loss forums/reddit or read scientific papers. They are waiting for perfect studies before they try anything. Usually, these people don’t see any results or even if they see it, they can’t sustain them for long or without side effects.

Almost every study comes from Western Science is Reductionist. They study a single mineral or extract of something to study efficacy of something so that they can eventually patent something or sell their supplements. That’s the reason, there are very few studies on whole foods.

That’s why many so called “scientific” people are not going to try it because according to them if it’s not “Peer Reviewed” or “Double Blind” it’s not scientific.

I would use studies to educate myself about potential side effects (if any) and then instead of using a sole mineral or vitamin, I would instead find a whole food which contains that mineral/vitamin/enzyme/co-factor and try it for myself. This is better way to approach hair loss. Don’t ignore Anecdotal evidence. Use it for your own advantage but use it wisely, safely and with least side effects.

If you want help with understanding if you are truly Zinc deficient, I can help you do that by analyzing your lab reports and suggest you appropriate course of action. Check Hair Regrowth Blueprint